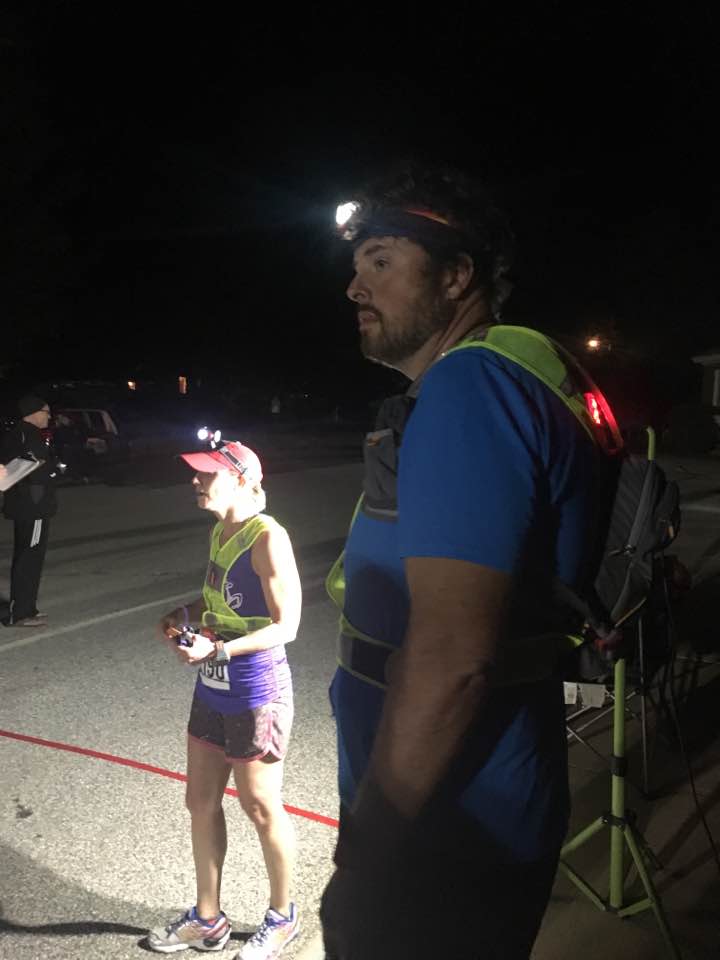 Everything felt a little strange, surreal you might say. Sure, five out of six of us in the van had done a Reach the Beach before, but we had never done an ultra. It felt almost like a different reality adding the “other half” of the relay we didn’t see together as a team last year. I kept thinking, “Wow, so this is what they were doing while we were eating or sleeping!” Kind of funny, I suppose. But strange. It had a strange, almost intimidating vibe.

My first two legs had gone as expected, and maybe even better. Everything so far had been about protecting my knee, so I was slower and my running form was adjusted slightly to allow less pounding on the right side of my body. Instead of lengthening my stride and attacking a downhill, I had to back off and land as gently as possible. Much of my training for this race was done at Massabesic Lake, where a ten mile hilly adventure was just what I needed to get ready for Reach the Beach Ultra. Often, on a downhill around Massabesic, I’d run sub 8:30 per mile going down, and often a bit faster. Here, to make sure nothing got hurt, I slowed down to about a 10 minute per mile pace and kept my body under control as much as possible. I was disappointed after all of my work to have to be so slow, but this race isn’t about speed. This time it was about survival.

The second legs flew for the rest of the rest of the team, as Dan, Melanie and Michele totally owned their legs. We were deep into forest for most of them, but there were a few traffic hazards that were a little sketchy to work through. Dan had to run the final mile of a leg down a very narrow road with cars every, and runners packed on both sides. Melanie became one of those runners on the other side of the road as she started her next leg and went back the way Dan came in. It felt a little exhausting to have to run and then rerun the same road as a team, but we were too busy not trying to hit any runners to think about it.

Melanie finished strong and looked great. Michele had recovered nicely from her 10.9 mile leg, and we raced her to get Christy ready for her at the next Transition Area. I tried to sleep on the ride over, but it fruitless. It was too early and I was too hyped up to get much shut eye. I gave up right after Christy took off in her night gear. We were back on a set of legs we had run before, and Christy had run the exact same leg last year. Everything felt back in sync.

I had eaten this epic turkey sandwich Michele made for the team. Sure, it was just a turkey sandwich, but out here it might have been a creation of Jamie Oliver or something. It was the best turkey sandwich I could remember. I was chowing peanut butter energy balls, my go-to peanut butter and chocolate Advobar, and whatever else I could get my hands on. I stopped eating an hour before my run and made sure to hit the ever lovely porta potty for good measure. I also had thoroughly cleaned up with the ever-important baby wipe showers we all engage in on this relay, especially on the ultra. Basically, if you get the sweat off of you and take care of yourself during the race, you can make it. But, if you ignore even the little details, those things can end up haunting you the entire race. Like having no energy to run because you’re under nourished. Or chafing drama because you didn’t clean up properly. None of these things were happening to me this year. If anything was going to beat me it would be physically, not mentally.

Darkness had set in quickly, and Christy had flown on her third leg. Julie was off and so were we. I remembered the next transition area from last year. It was some elementary school where the parking situation got a little intense and a few wired up dorks were yelling at other van drivers who weren’t being overly kind getting out of there. When we pulled in, it looked like a totally different lot, and they had accessed a much larger area to pull the vans into. Good news! I had an 8.1 mile run, so my team would have plenty of time to get to the next transition area anyway.

The picture attached from the start of this leg. I was sober minded, remembering the monster hill I’d be facing ahead, the same one I saw Dan run the year before. I waited for Julie, and she came in just as expected. I was pumped, as I took the bracelet and headed into the first of three eight mile runs in a row. As I ran down the road, I waited for the turn to the right and to head out to the main road where Dan had run. And I kept running. And kept running. And the turn never happened.

There was no street lights, no wide sidewalks and no early monster hills. Ragnar had made a change and I had somehow missed it. I was off on a dark, quiet rural road heading into nowhere. Up and down smaller hills I ran, still being careful on my knee. I felt I could go so much faster, but every time I increased my pace, I’d feel a slight twinge in my knee and immediately backed off. I felt great and my training had been enough, so far. Traditionally, each runner in a Ragnar Relay does three legs, so if we had been in a normal relay, I might have gone after it a little bit and picked up my pace. I backed off more and more conserving my strength for the next three legs, two of which were brutal.

I was thrown off a little by the change in my course, but enjoyed the quiet run in the dark. The hills were completely manageable, which I was grateful for. I had some fun conversations with other runners, and was passed by more gazelle-looking people than on any other leg. There were some wicked fast people blowing by me. I enjoyed their athleticism and focus, as I continued to slow mile after mile. I had run sub ten minute miles on the first two runs, but this one was not only longer, but I knew what was coming. My last few miles were closer to eleven minute miles. It wasn’t the hills at all. I could totally handle the elevation. I still kept thinking about what I was going to endure in my next leg, the leg I had been training specifically for, for the past four months.

I sped up a little at the finish and came in to see a very happy team and a strong and fast Dan ready to go. I was encouraged the first half of my legs and eighteen miles were complete. 22 miles and three final legs remained, including the run in the mountains I had been waiting for. It was finally almost here. Eight and a half miles of incredible climbs was about to happen, and I had no clue if I could make. All of the preparing and months of training had now come down to this.

The truth was, I knew I was already beaten. Is it bad to admit this? Even in training I was convinced I couldn’t run this whole leg and I would have to walk. There was no way I could run some of those hills. I wasn’t okay with it, though, and if there was a whisper of hope it could be done, I would give it everything I had. I was humble and ready. The run of a lifetime was about to go down. But not me. I wasn’t going down. In fact, something was about to happen I never expected, and everything about the rest of this race was going to change.