Good-Bye and Have Courage 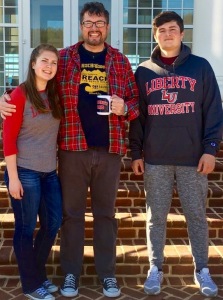 I am saying good-bye to two of my kids pretty soon. Max is 18 on his way to college, and Kaitlin, 17, is off for the summer to serve God by ministering to the Bahamian Children through Camp Bahamas. Max is leaving in August, and Kaitlin flies off at the end of June (check out her page if you haven’t had a chance https://www.gofundme.com/2e4h8vpm). This is the first time they will truly be on their own, and I want them to experience this life and the world around them. I am not hoping for some safe and passive existence, but one mirroring men like David in the Bible.

You all know the story, don’t you? The story of David and Goliath, the story of the monster and the boy? In I Samuel 17, Goliath, in full armor, is standing before David.  David, with his faith in God, is now in a all-out-dead-sprint to stand toe-to-toe with the scariest dude on the planet. And you know the rest of the story, right? David whips the stone, it sinks into Goliath’s head, and the monster dies. David stands victorious and David praises God for what he has done.

I want my kids to be in the mold of David. I do not want a bunch of scared wimps. David was faithful and strong and fiercely tenacious in his belief that God would give him victory in the fight. Goliath, as big and strong as he was, believed merely in himself and his own strength, and counted on his own power. It’s not so much, is it? Our power? Our own strength? With God all things are possible, but on our own, it’s just never quite the same.

My kids will face opposition, just as I have faced opposition. They will stand before the giants of this world, whether they like it or not. And they will either cower to anxiety, fear and stress, or they will trust in God and what he is going to do. I will not be there to help them, because that’s just not what God wants from me anymore. He wants me to pray, but for the most part my job here is about done. There comes a time in every child’s life where they will have to figure out this life for themselves, and make a final decision for what they will truly stand for in this world. My time with them is in twilight. Their time has now come, and I believe they will find their courage, just as David did, and stand up to the giants of this world. If they won’t, who will? If you won’t, who will?