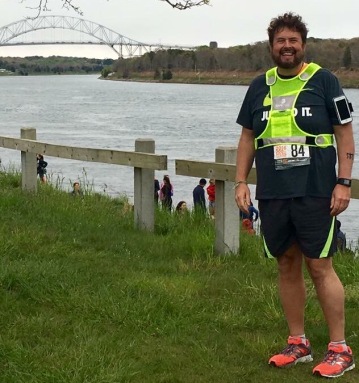 Melanie had passed the bracelet to Boz and he was off on a course described only as “Wicked Hahd!” To appreciate this, as it’s intended to be, you must be pronounce this only with a Boston accent. For the next 10.5 miles Boz would climb the rolling hills of Eastern Massachusetts. This was a task only given to the toughest of hombres, and Boz certainly fit the description for us. Up and down he went, turning down rest and water, fighting through each of these brutal hills. He was on his own, and I drove the support van ahead to meet him at the next transition area. On the way to it we discovered the road turned into nothing but gravel with about two miles left to go.

The worst thing about a gravel road is the runners have to endure the flying dust as cars drive by. I slowed way down as we passed each runner to ensure they would not have dust blowing in their face off our truck. As we rolled into the transition area, I looked for a Ragnar official to help. Melanie, like Christine, Cathy and Christy before her, didn’t have a bad cut, but we now understood the soft metal in the bracelet had become exposed and was rubbing against the runner’s wrist until it broke the skin. I was glad we had finally determined what the issue was, and we knew Ragnar would help us.  We were told we could easily switch bracelets at the Transfer Station, which came after my run. I followed Rebecca, who was now waiting for Boz to finish. After 10.5 grueling miles, they incorrectly announced “Number 64!” to which I started shouting “It’s 84! He’s number 84 and that’s us!”

With another perfect handoff, Rebecca tucked the bracelet away and was off. You could see the look of determination all over her face. Boz received a special medal given only to those who completed this leg. “Wicked Hahd” it said on the medal, which came with a bottle opener as part of the metal engraving. There was a photographer and pictures with “Wicked Hahd” signs, but Boz wasn’t having anybody take his picture. “I lived it” he kept saying and the run itself was clearly enough for him.

We left and headed off to the final transition for all of our first set of legs, finally arriving at the shores of the Cape Cod Canal. Very soon Rebecca would find me ready and waiting. We passed her and she flashed us a big smile with a hearty thumbs up. She looked very happy and determined, and had flown through the first part of her run. In fact, with a tough hill early in her leg, Rebecca was running incredibly well, especially compared to the runners around her. The skies were getting darker, and the clouds were blocking the sun. The forecasted rain was most definitely on the way. I didn’t mind running in it, especially since it was still a rather warm feeling sixty degrees.

Arriving at the transition station, we parked and got out. The canal was picturesque and provided an excellent backdrop for my first leg. Pausing for a moment, I studied myself up and down to make sure I was ready and prepared for anything. As perfect as everything might have seemed, mentally I just wasn’t there. For some reason, I can’t really explain, I didn’t feel the usual excitement before I go off in a race. In fact, there was some lingering doubt going on in my head. I was well trained and rested, but something just seemed off. As some doubts eased into my brain, I casually shrugged my shoulders and told myself to cut it out. I stopped thinking about anything regarding my own run, and just stood there waiting for Rebecca. When she got to me, I was going to simply put one foot in front of another and go! This was a decision I had already made, and there was no backing down now.

I made a quick stop at the porta-potty, and then headed down the steps to the Canal and waited for Rebecca. To everyone’s excitement, our friend from the other team from Rock Your Body, Erica Marino, was running past us towards her teammate Joanna Tong. We cheered wildly for Erica and watched the fast and strong Joanna fly out of her transition area. I turned back and looked down the length of the canal waiting for any sign of Rebecca. She would be racing down the canal any minute. The time had come to get in place for the handoff. Suddenly, and moving fast, Rebecca came hauling through the crowd, which included some kids battling with their parents and stressed out race officials. She was here, and ready or not, I was about to go.

Everything still felt pretty weird. Honestly, it just didn’t feel normal at all. I didn’t feel like I was going to be able to run right now, and didn’t really know why. Mentally, I just completely shut down and focused on just running out of the start. Just take the bracelet, put two feet in front of the other and go. ‘Don’t make this into something else, Thad’ I kept thinking. My thoughts were a wreck. My energy level seemed surprisingly low. It didn’t feel like I wanted to run right now. I couldn’t explain it. It just all felt off.

Rebecca was closing the gap and finally it was my turn. Whatever this was going to be, it was going to be and it was time for me to run. I wasn’t going to wear the bracelet, or so I thought, but as soon as she handed it to me, I slapped it right on my wrist anyway, turned, and began to run. I was off, low energy or not. Regardless of where I was mentally before I started running, almost immediately I felt solid and strong. My energy level was completely fine after only a few steps and my pace was around 8:30 a mile. After a mile and a half on the canal, I turned and headed up a winding series of hills, and ended up cutting through a parking lot, finally arriving at the best and most challenging part of my run, the tough climb up, followed by the fast run down the Bourne Bridge. The traffic on the road going over the bridge next to me was stop and go, and it seemed like the lady right by me in her green station wagon was staying next to me almost the whole run up the bridge. She had her windows down, sang pretty loudly, and was accompanied by her dog who was growling at me from her backseat. Her windows were all down, but I didn’t care if the dog actually jumped out and came after me. I’ve had too many animals chase me to care anymore about just one dog. Keeping a good pace in front of me the entire way up, I followed a runner who pushed my pace a little. She suddenly stopped when she reached the top, however, and I shot right by her, anxious to get away from the singing lady with the dog, but most importantly, I wanted to finish the run with some strength. My pace quickened, and suddenly, I was off the bridge, yelled “Thanks!” to an officer holding up traffic for me. I was running pretty fast to the canal on the other side of the water where I had been a few minutes earlier.

The rain started to fall, cooling me off as I tried to hold the hard pace to the end of my first leg. As I neared the end of my leg, I backed off some, my mind stuck on the two legs I had to yet run within roughly the next twenty hours.  There were race officials ahead, and when I reached them, they directed me off of the path, and onto a very small trail through a small piece of land and over some railroad tracks. Leaping with some strength over the tracks, I arrived at the transition station and saw my team. I quickly turned the corner and there stood Beth, ready to run. As I pulled it bracelet, she flashed a big smile and the replacement bracelet Ragnar had provided. I was thrilled! I gave her a high five and she was gone.

The rain felt good. My team was happy. My first leg was complete and whatever mess was in my head before was now gone. About five solid miles were now in the books, and everything felt just fine.  The other van was now running into the rain and into the night and we were off to get dinner and then a few hours of sleep.  We would begin running again around 11:30PM and were very optimistic as the sun set into the West. We weren’t afraid of what might come in the darkness, and we didn’t need to be. As we travel the silent, lonely, pitch black roads winding the cape, we would find some surprising speed, and more importantly, our courage. I’m glad we did, because of every one of us would need a it before this was over. Especially me.