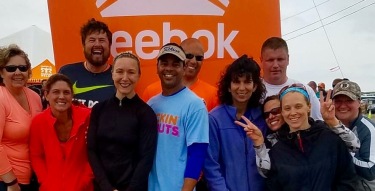 My side and back were exploding. I’ve rarely had a cramp I couldn’t shake, but suddenly I had two and they wouldn’t go away. Each stride brought me closer to the top of this hill, thanks to a determined runner I had decided to keep in my sights. She was running about a ten minute per mile pace, which was perfect. This leg had to start slower if I was going to survive, and this pace felt just right. The eleven other members of my team were counting on me to finish, but after two minutes of running, when the cramps first exploded, I knew I was in trouble. I’ve had a history of fighting the obstacles we runners face, though. I’ve been here before time and time again. This other runner seemed determined, too, and if you’ve ever done any type of distance running, you find inspiration wherever you can. Right now, seeing another warrior out here fighting was what I needed most.

She stayed a couple hundred feet ahead of me, and I knew she was going to pull me through at least a good chunk of the grueling 7.6 miles we both had left to get to the finish line. She finally reached the top of a pretty tough hill. I was still climbing, as she waved to a van up ahead on the other side of the street. This must have been her team, I thought. The sun was scorching down on us, and I was soaking wet with sweat after only two miles. She probably was grabbing some water and encouragement. She slowed down as she approached them, but didn’t grab for the water bottle I expected to see. Just as she reached the van she suddenly stopped, took off her relay band, and handed it out off to a tall, young man. I was completely and utterly shocked. If a runner gets hurt, of course, we switch out, but this wasn’t a transition station and this was obviously planned. He enthusiastically shot off like a bullet as his team cheered him on, and then celebrated her running of two miles. What happened to her finishing the entire 9.6 miles?

The young man was flying away from me, like some spirited gazelle, ready to tackle the toughest part of her run. Who knows? Maybe he was running to the next handoff to yet another teammate. My team was long gone, however. We were told there was almost no van support on this final leg, and we wanted to make sure we could all be there together at the end of our almost 200 mile journey. I left them at the final transition station, told them I’d see them at the finish and wanted to make sure they had plenty of time to get there. At this point, they were probably on their way to a shuttle bus to the finish line. They would be waiting to meet me at the top of the final hill, and together we would cross the finish as one team. This was the final of 36 legs, 9.6 hilly miles in the now blazing sun. It was supposed to be about the final runner’s fight to the finish, at least this is what it had been in my mind. The runner pulling me through was long gone, probably drinking water and having a snack in her air conditioned van. The cramps, the heat, and my exhausted legs were what stood between me and the finish line. Maybe I was wrong. Maybe I just took it too far this time.

I pulled my phone out of my arm band. If I called them, they could replace me, and someone else could finish this. I never dreamed I’d be thinking about this, but after what I’d just seen, maybe this was what I needed to do, too. Melanie was a stronger runner than me, anyway, and she could totally run these last miles in my place. She could get a ride, switch with me, and finish the race for me and for our team. No one would blame me. They would say I did my best. They would console me and we would love how she came to my rescue and for her tenacity to race to the finish. We would cross the line together, and isn’t that what really mattered anyway? If I called them right now, there would be just enough time to do this. I looked at my phone and then at the road in front of me. I took a moment and thought about it and what it would mean to me. Just me. I remembered not being so hurt, but dropping out of the Flying Pig Full Marathon in 2011. I should have fought harder. Yes, I was hurt, but I could have kept fighting. I know it was in me. I remember the deep disappointment, but I also remember how I insisted on coming back the next year to earn it on my terms and finish things the right way. I remember how quitting made me feel and I hated it.

With a few more steps and a deep breath, I completely felt it. I gritted my teeth as my eyes narrowed and now I was mad. I put my phone back on my arm band for the rest of the race and lengthened my stride. I wasn’t calling anybody for help. No freaking way. I might have been alone, exhausted and in pain, but one way or another I was going to get to the finish line. Nothing was going to stop me.

It all started last October, when a group of us decided to sign up for the Ragnar Cape Cod Relay. My wife Melanie was our captain, and I was thrilled. We were off again on another adventure! Just a month earlier, in September, we had successfully completed the Reach the Beach Ragnar Relay, and this one promised the same exciting journey as our first. We loved so many aspects of our Ragnar experience, such as rooting for your teammates and the thrill of accomplishment, especially on the mountainous, long runs. The training was tough, but we were very motivated, and both Melanie and I would be ready.

According to their website, The Ragnar Relay began as a single race in Utah in 2004, and today has over 35 races throughout the country. Each race is roughly 200 miles, of which are split up usually between twelve different runners. Some teams, however, go the ultra relay route, which means you have anywhere from four to six runners, making it at least twice as difficult. The twelve member teams have two vans, holding six runners each, and call themselves either van 1 or van 2. Each runner is assigned a series of legs, and has to run only their legs, unless an injury happens out on the course. It takes a good amount of organization and preparation from the team captains, but Ragnar is very willing to help out at any step of the way.

We had assembled our team of twelve, two of whom had run with us in September, Beth Moore and Christy Ramos. It’s kind of funny once you’ve experienced a Ragnar Relay with someone. It’s like you randomly see them somewhere and you can give them a nod and they nod back with slight smile. Once you’re on their team, you are always on their team. We were very happy to learn both of their husbands, Kevin Moore and Steve Ramos, would be joining them in their van, along with our dear friend Joya Anderson and experienced marathoner Cathy Breslin. This was our teams Van 1. Van 2, Melanie’s and my van, also included our friends Rebecca Tremblay, Christine Silwinski, and a wonderful couple, Stephanie Cardoso and her guy Boz. Rebecca and Christine were new to Ragnar, and full of enthusiasm and some serious questions, as they should be. It is definitely not for every runner! It takes endurance, the ability to survive on almost no sleep and a ton of determination to complete a Ragnar Relay. To do it right, your whole team exemplifies all of this. We also were connected with another team, led by Chris Crowell, which included a bunch of our other friends. All of us are connected through Rock Your Body, out of Fremont, New Hampshire. Though we were connected as two teams, when it comes to the relay race itself, your individual team is about all you’ll consistently see throughout the race, and the only thing your results depend upon. Your entire focus is for twelve runners to finish two hundred miles together as a team.

We both had our teams, and were thrilled. Excitement continued to build as we trained and the first day of the race was close. The night before felt like a kid on Christmas Eve, to me at least. My energy seemed boundless, as I dreamed of the journey the next day. We would be on the road around 8AM and headed to some town I’ve never heard of in Massachusetts. The drive there, even going through Boston, was uneventful, which is exactly what you need before undertaking a challenge like this. Showing up rested and calm was just part of preparation for the relay. We were ready, and our adventure was finally here. After months and months of training and planning, Chris and Melanie had built two really solid teams and we were ready for the big race. This was Melanie’s and my second relay, and having gone through one already, we knew to expect the unexpected. We didn’t quite know, however, how unexpected it all was about to become.

(to be continued tomorrow)